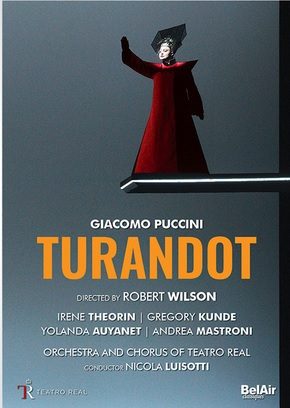 Last May BelAir Classiques released on DVD & Blu-ray the production of Turandot which, after a 20-year absence, the Teatro Real brought to the stage in November/December 2018. A new production by the renowned American director Robert Wilson has been presented, in co-production with the Opéra National de Paris, the Canadian Opera Company of Toronto, the National Theatre of Lithuania and the Houston Grand Opera.

It featured a prestigious cast, led by Gregory Kunde as Calaf and Irene Theorin as Turandot, and it was conducted by Teatro Real’s associate musical director Nicola Luisotti. The new production has been highly acclaimed by both the audience and the critics.

“In my opinion, the best part of the evening was the performance by American tenor Gregory Kunde, as Calaf, who sang and expressed to perfection. He handled the most well-known sections brilliantly and also the more challenging ones. It must be mentioned that he did not shy away from the high C of the second act, as some of his colleagues do. He held it perfectly. He was especially brilliant in the always much-anticipated Nessun Dorma. In short, an outstanding performance by one of the most important tenors of the moment.” José M. Irunzun (OperaWorld)