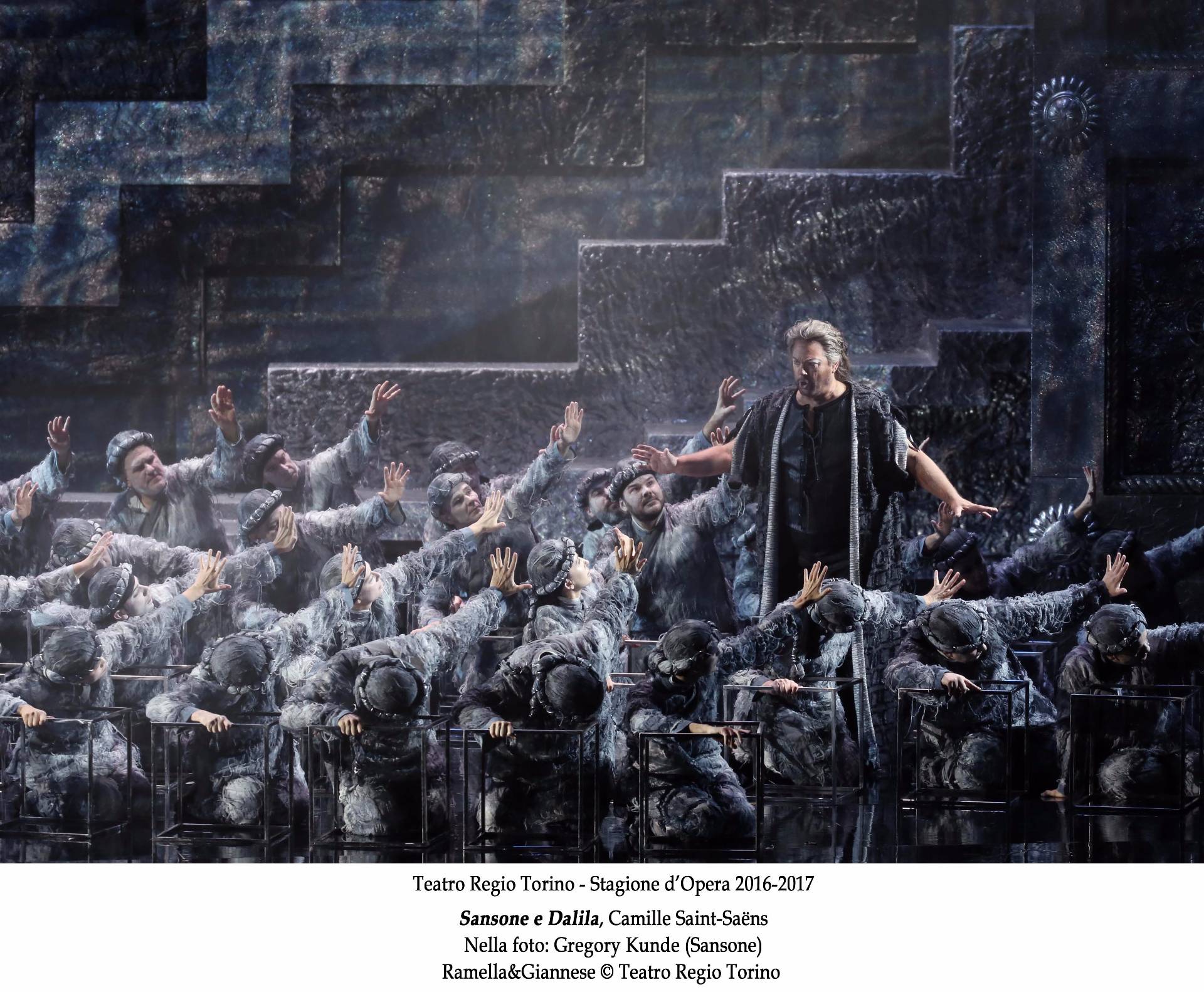 From November 15th to 26th, the American tenor Gregory Kunde sang the title role in Samson et Dalila at the Teatro Regio di Torino. His performance as Samson has been unanimously praised by audiences and critics, and in the specialised media we can read the following comments:

–        “For the role of Samson the Teatro Regio has chosen Gregory Kunde. After the Otelo of two years ago, the American singer takes on another work that is very demanding at both the vocal and the stage performance level. Now past sixty, Kunde shows that he is a singer with extraordinary class and vocal intelligence. He strives to create an authoritarian character, in terms of stage performance as well, but does not become hieratic or neglect the human drama. This makes the recognition of his love for Dalila in the second act especially expressive and tormented: a concession to a humanity of sentiments that forebodes guilt.” Ludovico Buscatti (OperaClick)

–        “Gregory Kunde, Samson, proves yet again that he is an outstanding tenor, with a full and supple voice, capable of performing the most demanding of roles: a true Heldentenor who, without giving priority to the quest for spectacular high notes and always giving more weight to the quality than to the quantity of sound, manages to express the personal anguish of the biblical hero, shifting from the burning passion of the duet with Dalila to the extreme pain of Vois ma misère, hélas!; all with perfect control of intonation, which translates into fabulous high notes and a sound that is full and burnished and at the same time brilliant”. Giuliana Cutore (BelliniNews)

–        “The cast has also been sensationally good, beginning with the presentation in Italy of Samson by Gregory Kunde, who just debuted in this role in Valencia. The tenor surprises listeners a little more each day with the skill and ductility of his singing; besides being totally convincing in the early acts with a gallant execution, his intense lyricism in the first scene of the third act is also very moving.” Andrea Merli (I Teatri dell’Est e non solo)

–        “At his sixty-two years of age, Gregory Kunde, with the solidity of his singing, the intensity of his interpretation and the heroicity of his phrasing, becomes Samson the moment he steps on stage. The singer in him strengthens and fades with no hesitation whatsoever, the musician in him respects the score with impeccable aplomb and the performer in him, always attentive and involved, allows the audience to forget the complication of some vibratos. Also priceless is the contrast between the insolent exhalation of God’s chosen one in the first act and the stifled affliction of a man humiliated and enchained, with which he sustains the lament and prayer introducing the third act”. Andrea Dellabianca (Connessi all’Opera)

–        “In Gregory Kunde and his enviable phrasing Samson finds determination and nobility of voice. A voice that still offers enormously effective numbers, and interpretation that is coherent and intense”. Maria Teresa Giovagnoli (MTG Lirica)

–        “At her side, Gregory Kunde is a Samson of surprising musicality and projection, with a triumphant high range. More surprisingly, this central tessitura does not seem to be a problem for him at all, as if his voice were maturing even more”. Jean Michel Pennetier (ForumOpera)