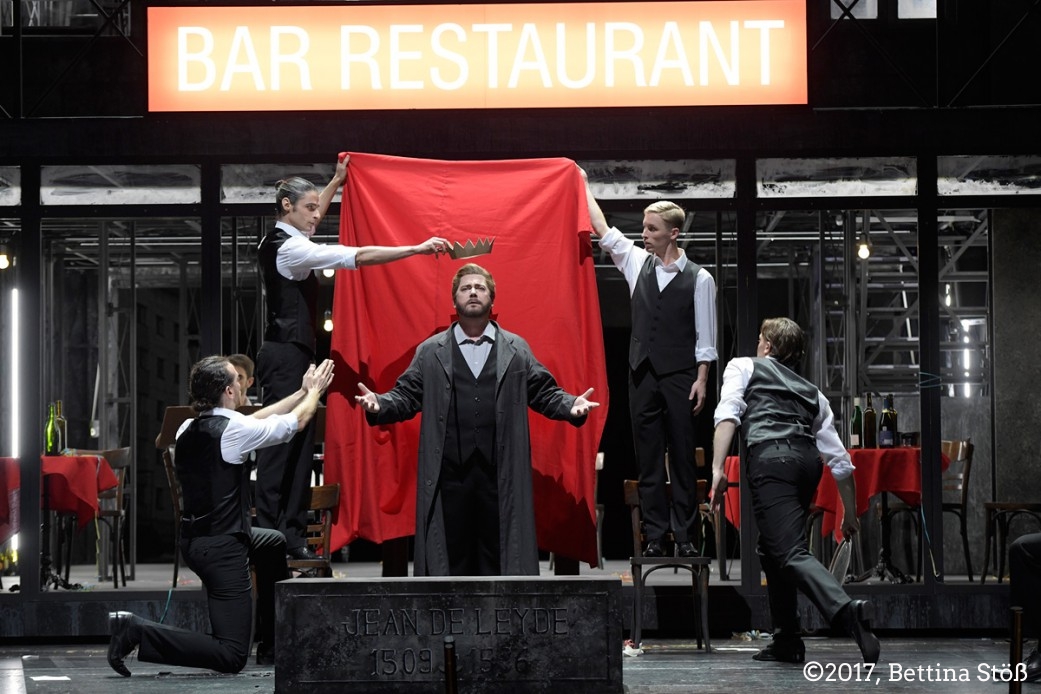 –  “As a belcanto specialist for decades, the tenor Gregory Kunde excels in the demanding title role. It is amazing how he starts with light phrasing in the second act to develop heroic brilliance from the third on. His voice has gained colour and power without losing the ability to cope with the abundant coloraturas and top notes in a perfect way”. Lutz Nalepa (GBOpera)

–  “In the title role, Gregory Kunde was able to suggest a reluctant figure whose inner moral sense and unshakable self-doubt prevented him from assuming fully the role of prophet; his ability to hold on to the remaining strands of his own humanity gave his fourth act rejection of Fidès much of its tragic power, but also made his reversal in the fifth act seem less contrived than it appears in the libretto. Vocally his finest moment was the impassioned speech delivered to the soldiers at the end of the third act, his soaring exclamations anchored by low notes with an almost baritonal warmth”. Jesse Simon (Mundo Clásico)

–  “The role of the protagonist, Jean de Leyde, was sung by Gregory Kunde, and it is difficult to think of a better performer, especially in vocal terms. (…) Kunde’s tenor is well suited to this character and his performance was very bright, particularly in the last three acts of the opera where he has the most to sing. It’s hard to think of a better Jean de Leyde today than Gregory Kunde”. José M. Arurzun (Seen and Heard International)

–  “In this stage of his career, Gregory Kunde bring together the best of two worlds: on the one hand, a technique forged in bel canto that allows him to do justice to the difficulties of the score (this was the first time we have heard the appoggiaturas in the repetition in the final revelling); and on the other hand, a stamina that allows him to comply with the duration (3h 25m of music in this edition). His intense upper range, up to b flat, enables him to also cross a particularly sonorous orchestral wall. His timely use of the mixed voice in the trio with Berthe and Fidès also deserves special mention. Whereas others would arrive exhausted to the final act, Kunde is still able to take on the last scene with freshness. His French pronunciation, both the accent and the articulation, is exemplary. After Les Huguenots and L’Africaine, the American tenor has confirmed his affinity with this repertoire. Jean Michel Pennetier (ForumOpera)

–  “In the main role, we have found ourselves once again with Gregory Kunde, who seems to be experiencing a second youth, judging by the optimal vocal conditions he has shown. The singer has thrown himself completely into the role, appropriating even the tiniest folds of his soul: ardent lover and devoted son who gradually becomes trapped in a mechanism he does not understand and cannot control, Kunde expresses with unreserved vehemence the internal contradictions that have no solution, moving progressively toward the final catastrophe. The role is long and very difficult, but the tenor shows no signs of exhaustion, from the story of his premonitory dream (Sous les vastes arceaux d’un temple magnifique) through the final couplet, and including of course a passionate Roi du ciel and the dramatic ending of the fourth act in which his worry about Fidès struggles to remain hidden. His performance was at a very high level: the voice is always firm, well projected, eloquent in the accents and in the character and rich in the dynamics”. Bruno Tredicine (OperaClick)

–  “It’s a hell of a work, too, for singers to master and American tenor, Gregory Kunde – an exciting singer with a richly-textured voice making his role début as Jean de Leyden – put in a commanding and exhilarating performance in such a strenuous and demanding part as, too, did the Russian soprano, Elena Tsallagova, as his lover, Berthe”. Tony Cooper (Planet Hugill)

–  “The large cast was very respectable, too, with Gregory Kunde singing powerfully and impressively as Jean, a character who, in the opera’s unconventional dramaturgy, remains strangely elusive”. Hugo Shirley (Bachtrack)