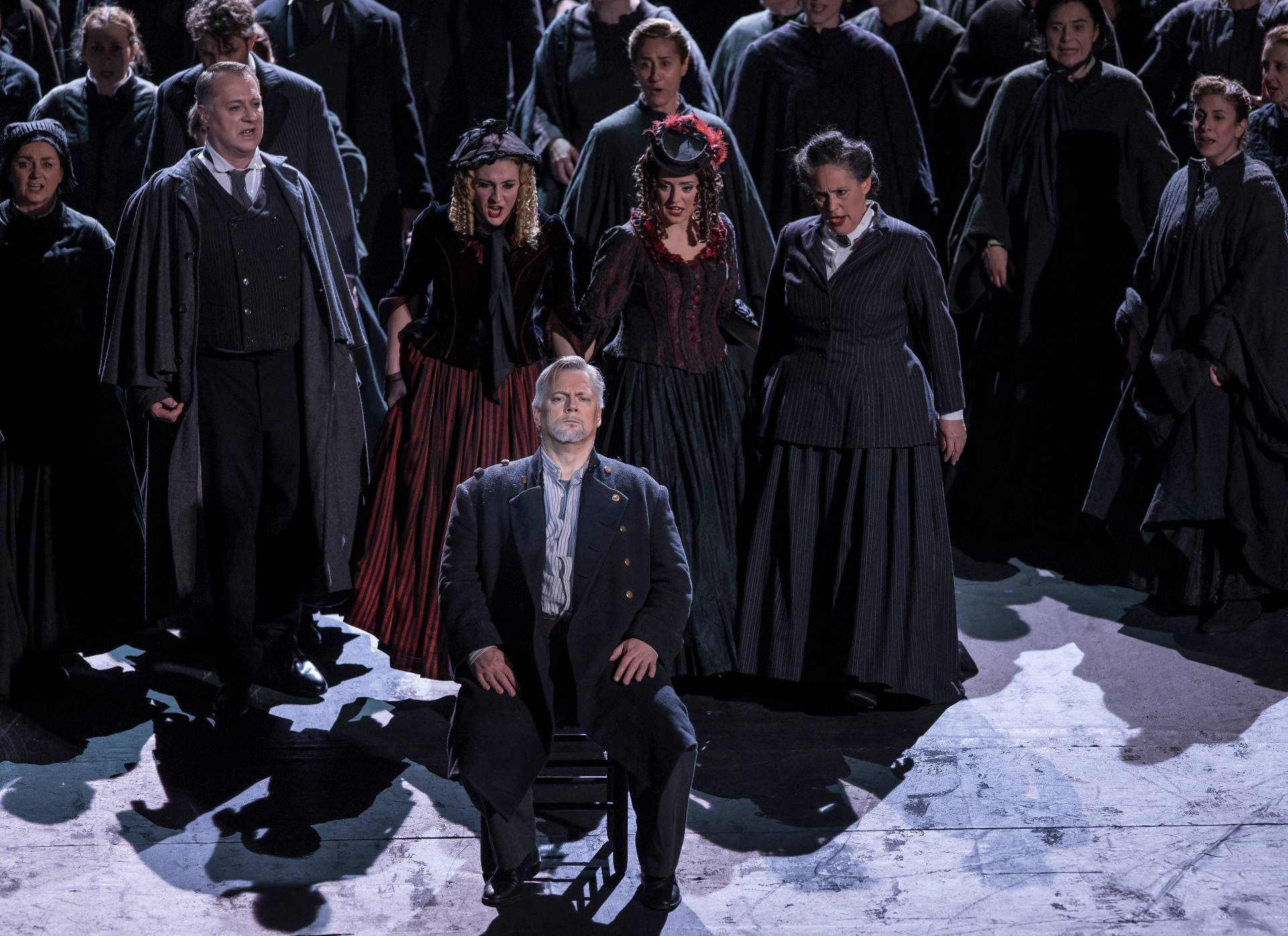 Between February 1st and 13th Gregory Kunde performed at Les Arts de Valencia, singing the title role in Peter Grimes, Benjamin Britten’s opera in three acts. His work has profoundly touched both audiences and critics, and has even been described as a “landmark performance”. In the media the following words of praise can be read:

–  “The absolute protagonist of the production presented on Thursday at the Palau de les Arts was the American tenor Gregory Kunde, who was making his debut in the complex, demanding role of the coarse fisherman Peter Grimes. It is a role that requires, in equal parts, a top-flight singer able to handle the tremendous vocal demands and a sharp actor, with the dramatic talent necessary to make the ambiguous main character’s unusual personality, and frequent mood swings, believable. With this triumphant debut, Kunde adds his name to the select list of tenors who have sung the role successfully… Kunde has dug deep into the character and given him absolute credibility. He made him his own! Both vocally and on the stage. It is hard to imagine a more intense, convincing or authentic performance. The thousand edges of Peter Grimes –kin to Wagner’s ill-fated Flying Dutchman– were revealed by the long-living American tenor, at the age of 63! In an interpretation that will go down in history as one of the most believable and authentic Peter Grimes ever. The difficult melodicism –which at times verges on atonality–, its taut tessitura, the precise volume to avoid being overwhelmed by the fantastic orchestration, the mezza voce segments that co-exist with the brusqueness sometimes required by the score, became defining elements instead of obstacles to overcome.” Justo Romero (Levante)

–  “Tenor Gregory Kunde comes to this role at a time of splendid maturity and at 63 years of age he continues to break records and incorporate roles that until recently, nobody thought he could handle, even though most of the tenors of his generation have already retired or are well on their way to retirement. In the case of Peter Grimes, it is a role that he had sung once in concert but never in a staged version. He never ceases to amaze, as the extraordinary quality of his interpretation is far beyond that of other performers in this role in recent decades and can only be compared with that of mythical singers such as Peter Pears and Jon Vickers; if it were put on a CD or DVD Kunde’s performance would become a landmark. The timbre of his voice is ideal for the role, lyrical and heroic at the same time; his command of all vocal resources offers the entire range of colours, dynamics and nuances needed to successfully present a psychological portrait of the character through its voice. There was no shortage of pianos or of mezza voce, but there were also moments of intense dramatism thanks to his ease of projection and innate musicality.” César Rus (Las Provincias)

–  “Of all of his impressive vocal achievements over the last decade, it may very well be that Peter Grimes is the role in which Gregory Kunde’s talents have gone the furthest. And this is because beyond the vocal marvels that he has demonstrated sublimely in other repertoires –he just sang Meyerbeer’s Le Prophéte and Donizetti’s Poliuto, before being Radames in Aida-, here Kunde shows that he is a consummate artist, able to go all the way, with an exceptional dramatic recreation of the unsettling protagonist of this opera by Britten. The first contact Gregory Kunde had with this opera was in Rome, at the end of 2013. Antonio Pappano was conducting the opera in its concert version, with the orchestra and chorus of the Accademia Nazionale di Santa Cecilia. Even then Kunde gave the impression that he had been born to sing this role. And the recent performances in Valencia have done nothing but confirm this, with his role/debut in a staged performance. Taking the same path as Jon Vickers –another great Otello, by the way–, Kunde’s Grimes is a poor wretch, desperate and tragic. Kunde should take this role to many more stages. It has been a very long time since this opera found such a perfect protagonist.” Alejandro Martínez (Platea Magazine)

–  “Gregory Kunde, the American tenor who is also a cancer survivor, offered a landmark performance of the title role of the opera Peter Grimes, in which he put all his vocal power into presenting a combative fisherman who must confront the suspicions and murmurings of his fellow villagers…. In a highly demanding role, Kunde has masterfully fashioned a character, the fisherman Peter Grimes, who is suspected of abusing his young apprentices, whom he treats contemptuously and tyrannically in his obsession with escaping his precarious living situation, in a village with neighbours who think nothing of judging others based on rumours and conjecture.” Juan Castelló (La Vanguardia)

–  “The opera is a fierce lament about double standards and society’s dictatorship over the individual, heard on this occasion in the voice of the American tenor Gregory Kunde, who offers in his debut in the role an intense, moving interpretation…. Kunde was much applauded by the audience, which did not fill up the theatre, for his rendition of the tormented sailor, stigmatized, persecuted and made suicidal because of his alleged mistreatment of his apprentices.” (Europa Press)

–  “Gregory Kunde is a vocal miracle, almost comparable to Plácido Domingo. How is it that a tenor specialised in bel canto can become a modelic Peter Grimes? And how is it that he can continue to sing Rossini’s Otello? All of this, moreover, after fighting cancer. Jon Vickers was a landmark Grimes and Kunde, with a much more lyrical timbre, does not lag behind him, despite this being Kunde’s first time in the role. In his favour he has subtleties, and a way of singing mezza voce, that belong to his other repertoire. What a fantastic artist!” Gonzalo Alonso (La Razón)

–  “The protagonist who gives title to the opera was played by Gregory Kunde, who I think was making his stage debut in this character, which he had only sung in concert, in Rome in October 2013. His performance was fully convincing, in terms both of singing and acting. Today, his voice is very well suited to the part.” José M. Irurzun (Seenandheard)

–  “Peter Grimes, by Benjamin Britten, makes its premiere at Les Arts, with an enthusiastic performance by the American tenor Gregory Kunde…. Gregory Kunde puts his wide range of resources to the service of the character. It is worth noting that this tenor’s versatility is such that it enabled him to successfully perform Verdi’s Otello and also Rossini’s Otello within a short span of time. He now delves into a score in which Sprechgesang (à l’anglaise) poses tough and different demands…without releasing him from the previous ones. Because Britten also asks him to sing, at times, quietly or in mezza voce, like the bel canto tenor he is, while other times he has to light a candle for Verdi, in hopes that he will accompany him on the journey. Luckily, this American singer, who is 63, sings everything, and not just any old way. His voice, whether delicate or powerful, always adapts to the score and the situation it represents. When he has to do “spoken singing” (Sprechgesang), as is the case in some passages of Peter Grimes, he can also do that, although his Anglo-American version has its particularities.” Rosa Solà (Culturplaza)

–  “The return of this production, with the special draw of it being the stage debut of Gregory Kunde in the role of the marginalized sailor driven insane by the intolerant treatment he receives from his surroundings, could not be more timely … Kunde gives his character dramatic depth and a wide array of nuances, especially in the upper register.” César López Rosell (El periódico)

–  “Loneliness, abandonment, contempt are evident in this Grimes offered by Gregory Kunde in his presentation in Valencia, contributing maturity and a certain decline with which he ably portrays the character.” Alberto González LaPuente (ABC)

–  “Gregory Kunde brought a lifetime of experience to the role.  His was a bel canto Grimes – not so much in terms of sound but in terms of technique.  In his ‘Now the Great Bear and Pleiades’ aria, he shaded the tone masterfully, making every repetition of the note sound like a constantly evolving rainbow of vocal colour.  He made some intelligent use of voix mixte as he reflected on his life, and brought out the beauty of Grimes’ melismatic writing throughout.  Not only did he sing the role but he brought out the sheer pain felt by Grimes, his complicated, multifaceted nature, not only through the voice but also through his physicality.  This run, of which tonight was the fourth show of five, is Kunde’s debut in the role and it’s a role that suits him very well… Kunde’s Grimes was complex, conflicted and, as he faced death, absolutely devastating – a victim of circumstance who was misunderstood.” (Operatraveller)

–  “Gregory Kunde is a marvel; there is no other word that defines him better… This stage debut as Peter that Kunde has given to the city of the river Turia is yet another diamond in a crown of jewels that this singer has fashioned with time and wisdom.We could enumerate the different passages of solos and duets with Leah Partridge that appear throughout the work… but we think the best thing to do is simply tell you not to miss it.” Robert Benito (Operaworld)

–  “And then, Gregory Kunde, who year after year dares to take on roles that are increasingly risky and who continues to move forward on a path paved with successes. Here is yet another one, and in his mother tongue. This time the American tenor embodies a Grimes who is introverted or violent by clumsiness. The youthfulness of his timbre, the ease with which he moves throughout the tessitura, the moments he sings mezza voce, yes, but also the insolent strength and projection which give the character all of its wrath, its pain and its ambiguity.   A clumsy man full of hope or an evil beast, Gregory Kunde leaves it to each of us to decide.” Yannick Boussaert (ForumOpera)