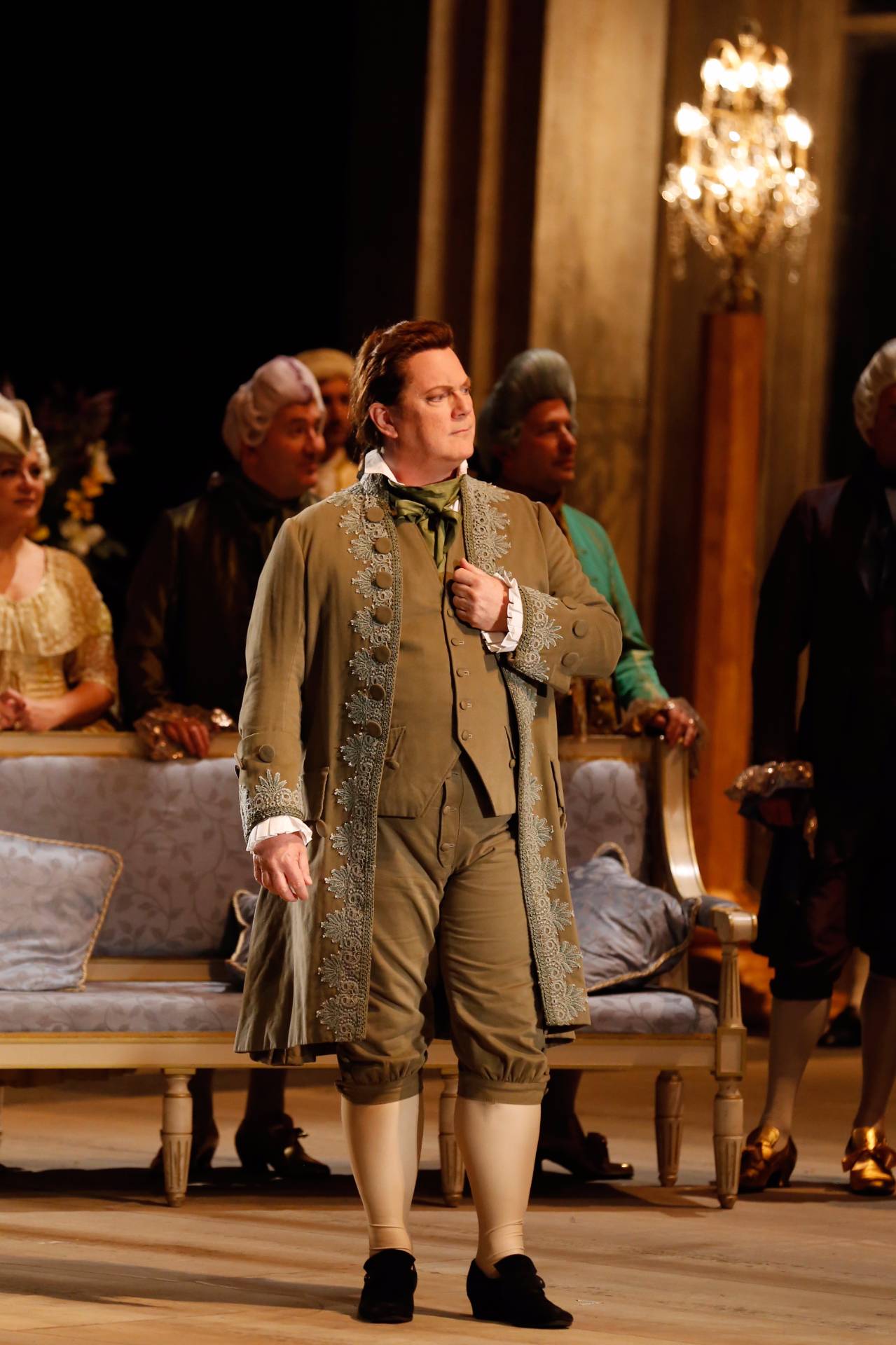 Between April 21st and May 2nd Gregory Kunde sang the title role in Andrea Chénier at the Teatro dell’Opera di Roma, a role he takes on again in a few days at the ABAO-OLBE, in Bilbao. His performance in Rome has been widely praised by audiences and by the specialised media, which dedicated the following accolades to him:

–       “…an extraordinary cast, dominated by the poet embodied by Gregory Kunde, whose voice seems to have gained even greater plenitude. A quite well-supported middle register and sharp high notes transmit a power and a fluidity that dazzle listeners. As always, his singing is careful, his phrasing impeccable and his musicality perfect in this role that has at times been sacrificed by less refined tenors attempting to show “muscle”. Although now past the age of a young gallant, the American tenor is able to create an attractive and believable character with the help of fine stage directing: yet another challenge has been met by this singer in his multi-faceted career.” Jean Michel Pennetier (ForumOpera)

–       “… the main role was entrusted to a true gentleman: Gregory Kunde, a heartrending tenor, devotes himself fully to the role and is not prone to banal acts of extraversion. His singing is completely dedicated to the words and phrases, like a true poet. Kunde has been acclaimed as a magnificent tenor. It is quite a surprise, unprecedented, if we consider that this was his debut in the role. Also, it seems incredible that a tenor who started out in the Rossini repertoire could have, after some years, acquired the vocality of a verismo tenor; that is, robust and declamatory. The medium-low register must be found more in the interior of the words than in the fibre of the singing. As his voice becomes louder it takes on a heroic tone, it grows in intensity and thickness, and he accompanies it at all times with aristocratic phrasing and finely-wrought text.” Carla Moreni (Il Sole 24 ORE)

–       “Gregory Kunde sings extraordinarily well in the principal role: the robustness that his voice has acquired over the years and his uniform register, the way he rises to high notes and the clear timbre he still has make him ideal for interpreting the role of the unfortunate poet. The famous Improvviso ‘Un dì all’azzurro spazio’, which sounds and shines with a smooth, pure timbre, sparks applause immediately. He knows how to give delicate accents to the two duets with Maddalena, especially the second, thanks to their Verdian and Wagnerian writing, and also to his aria of apology (‘Sì, fui soldato’). Roman audiences offer him a big ovation, thus confirming his personal triumph.” Stefano Ceccarelli (L’ape musicale)

–       “The protagonist, Gregory Kunde, is one of very few tenors who, after starting a career with a specialisation in bel canto and light lyric roles, over the years has been able to cultivate a dramatic vocation. This has allowed him to explore, like few others have done and with great intelligence, the entire repertoire, with many outstanding successes. His debut as Chénier shows a great vocal and interpretative richness which the audience appreciated enormously.” Antonello La Rocca (Roma Italia Lab)

–       “With regard to the cast of artists, the performance of Gregory Kunde in the title role was a precious pearl. Despite being 63 years old and having a very different repertoire behind him, he successfully gave the young poet Chénier strength and character in all registers, especially the high ones, which were firm and rich.” Sara Feliciello e Paolo Mascari (Ieri, Oggi, Domani, Opera)

–       “… Gregory Kunde debuts in this role singing a very moving ‘Un dì nell’azzurro spazio’. What can be said of the everlasting Kunde? He is one of the most versatile singers of our times; many years have passed since he performed in I Puritani in 1987 and, although his repertoire has changed a great deal, he is still as fresh as ever. He produced a very beautiful B in the final duet, but even more beautiful was the duet of the second act with that ‘Ora soave’ in which he goes beyond F and, with a slight Corellian-type portamento, slides up to A flat with incredible naturalness. The audience cannot help but applaud. It is easy to perceive the tranquillity of his singing, his total concentration on the text and how he lets the music do the singing, so characteristic of those who have truly dedicated their lives to this art.” Chiara Marani (Nel fiero anelito)

–       “Kunde has performed some of the most beautiful melodies of Italian opera; something for which critics were unable to forgive Giordano for years. There was a time in which some tenors sang them at full strength, as if they were the outbursts of a sermonizer instead of the melodies of a (pre)romantic poet, that is, deliberate, dreaming, diffused and even sombre. Gregory Kunde sang them with a perfect musical line in terms of phrasing, the range of carefully measured dynamics and the homogeneity of registers.” Mauro Mariani (Il Giornale della musica)

–       “With Chénier, Gregory Kunde adds a new role to his already extraordinary career and once again hits the bull’s eye with his tenor’s timbre and the moderation selected for the poet.” Pierachille Dolfini, (Avvenire)

–       “Gregory Kunde allows all the passages of his voice to be perceived and executes a marvellous ‘Improvviso’ sustained with the same strength as the ancient arches. He dialogues well in the second act, sings ‘Ora soave’ magnificently and reaches his peak in ‘Fui soldato’. He saves his energy during ‘Come un bel dì di maggio’ (inevitable, due to the lack of an intermission) and he sets off fireworks in ‘Vicino a te s’acqueta’.” Giacomo Agosti (I Teatri dell’Est e non solo…)