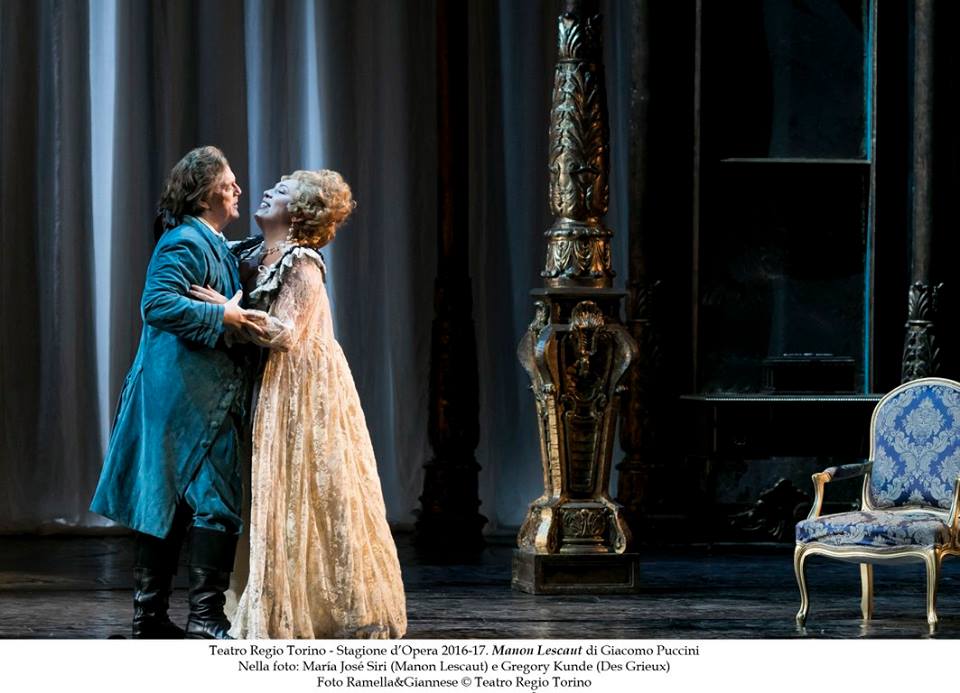 Manon Lescaut, a lyrical drama in four acts by Giacomo Puccini, was staged at the Teatro Regio di Torino from March 14th to 26th and then on March 30th a concert version of the opera was performed at the Grand-Théâtre de Genève. The American tenor Gregory Kunde gave life to Renato des Grieux, offering performances that were very successful with audiences and critics alike. The following words of praise appeared in the specialized media:

– “Gregory Kunde, De Grieux, comes on stage and yet again the audience is amazed by the freshness of a voice that has, over the years, gone through an incredible metamorphosis. That same audience is witness today to his Italian debut in this Puccini role; he who began with Bellini’s brilliant high notes. Outstanding, Kunde, always. Vocally impeccable, with a corpulence that seems renewed and a timbre that continues to be his strong point.I can state that, even without the ability to see into the future, I was, from the very beginning, quite confident, knowing the vocal gifts of the two artists as I do, that the fourth act was going to be spectacular.” Natalia Di Bartolo (OperaeOpera)

– “In his second show at the Regio this season, Gregory Kunde once again demonstrates his great quality, not only as a singer but also as a musician. The tenor’s voice shined in all its splendour in the wealth of harmonics that the long phrases of the passionate declaration “Donna non vidi mai” have within them. His performance is less convincing in the light-hearted happiness of “Tra voi belle, brune e bionde”. Besides the charm of Kunde’s timbre, there is also his vocal power, truly enviable if we remember he is over 60 years old. The desperate entreaty of “No…pazzo son” that ends the Le Havre port scene sounded absolutely sincere and truly sorrowful. In the upper register, well-emitted in the masque at all times, the tenor has shown a solid command of support, which ensures a firm and vigorous line of singing.” Ludovico Buscatti (OperaClick)

– “In terms of voice, it can be said that Kunde performed the role of Des Grieux on a day in which he was in a true state of grace. The American tenor never ceases to amaze in his debuts: despite his age, his voice has remained incredibly intact. In fact, over the years it has acquired even greater robustness and timbre, characteristics which, along with his perfect projection technique, allow him to stand out above the sea of sound that Noseda draws from the orchestra, filling every corner of the hall.” Giordano Cavagnino (GBOpera Magazine)

-“Her companion on stage, the veteran – and true force of nature – Gregory Kunde is at the same level. At the age of 63, the great American tenor – who was a vibrant Otello at the Castell de Peralada Festival in the summer of 2015 – sings a Des Grieux of an astonishing calibre: his voice is simply perfect for giving body to Puccini’s music without sinking into an excessive, pathetic register. In the nuances, the tone stays both strong and vibrant: the passages, softly caressed, easily pass over the orchestra ramp, which is located right behind him, while the singing never becomes saturated, even when it is at maximum power. Both artists receive an especially substantial (and much deserved) ovation at the curtain call, and we can only look forward to seeing them again next month in Andrea Chénier, at the Opera di Roma.”Emmanuel Andrieu (OperaOnline)